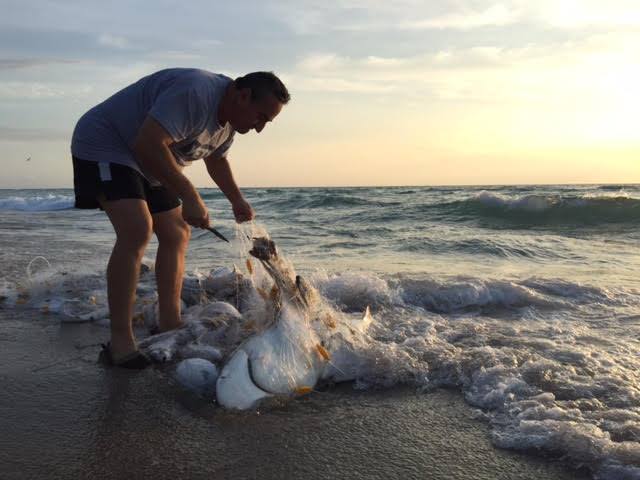 As per the Nautical Almanac, sunrise today was at 7:17 am ET. It is the perfect time to go to the beach, and enjoy the moment of the day when everything changes in an instant, when breathing in and out helps me find answers to all the questions that disturb my soul… The Center of the Universe is consistently good to come up with good answers at that time of the day.

I finished contemplating sunrise and I sat down to meditate. My mind started wandering course less.. Up until a smell like rotten fish became so apparent that I had to open my eyes.

Right in front of me I had this sad view, only possible because the most ruthless and destructive predator over the face of this planet. Lo and behold there was a mixture of nylon nets, several dead fish and a shark. The waves persisted in pushing that vision up the beach. I closed my eyes before I decided on moving upwind. Two vultures showed up, to patiently wait for the shark to run aground in dry land.
When I opened my eyes again, the shark was still fighting for its life. I run towards a young couple who were meditating close by. I asked them if they happened to have a knife. They did not, but the guy run towards me to help.

Unexpectedly a man, with a long black beard, walking down the beach with his two kids, seeking for a good fishing spot, handed over to me a knife. They seemed to show up, out thin air. Rob, that was the name of the boyfriend, started to help me to carefully cut all the nylon around the poor young female nurse shark.

Nothing heroic… What were the odds? A poor shark, belly up, exhausted, scared, a nurse shark only capable to bite as hard as a German Shepherd; plus the poor thing allowed us, very docile, to help her. Yet… for the group of 20 or 30 already there, it was a SHARK!!!!

Once she was released I towed her away from the sand pulling from her tail. She was exhausted, so the next wave brought her back to the beach. By the second tow she was back in her domain and she started swimming away and I simply wanted to swim right behind her, in envy, and get lost in that Kingdom.

The vultures were gone by then. Answers to my questions… Perfectly responded.

Thanks Center of the Universe for a Magical Moment.

This fact was published in the Miami Herald (see news)